Local News Vs. Mainsteam News: How Does the News Follow-Up on Stories?

As I walked to class last Thursday on UCSD's Library Walk, I was handed a small blue flyer with an announcement that Ron Paul, one of the Republican candidates for Presidency, was coming to UCSD on Friday, May 4th. 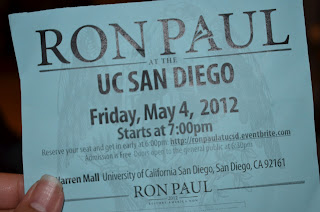 With UCSD students handing out flyers as a way to promote Ron Paul's visit, I wondered how the media would cover the event.  The media coverage ranges from grass roots publicity from UCSD students, local news in the San Diego area, and then mainstream news organizations such as CNN, FOX, or NBC. Would Ron Paul's visit be publicized in the mainstream news? Which way of media coverage would follow-up on the event after its promotion?  In order to answer these questions, I took a look at publicized articles from the Internet and newspapers, to see if Ron Paul would be mentioned before and after the event.

Before the event, there were posters for Ron Paul around campus such as in Price Center, taped up on the pillars in the eating area.  That was my first encounter for the event.  I did a quick Google Search of "Ron Paul UCSD" to see whether there was any internet buzz.

I was able to find one article from the San Diego Union Tribune that mentioned Ron Paul coming to UCSD, and another from our own school's The Guardian.  What's interesting is that not even UCSD's own website mentions Ron Paul at all.

My second encounter of the event came from the flyers.  It was given out by UCSD Youth for Ron Paul to other students in order to promote the event along Library Walk during the Vendor Fair.

There was a lot more coverage after the event from local news channels such as San Diego 6.
Yet, when it came to major news sites such as CNN, Fox News, and NBC, they only covered his major appearances on shows like The Tonight Show with Jay Leno.  There was no mention of Ron Paul coming to UCSD.

The news source that gave readers information before and after an event was The Guardian. 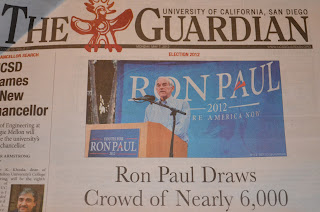 So does this mean that small localized news can effectively cover an event better than the mainstream?  It's possible.  Local news sources have the ability to focus on a smaller area of news coverage than mainstream, which allows a focused coverage.  Mainstream on the other hand has a larger pool of news to present to the reader, whether on a national level or international level.  The downside to mainstream media is that not all the content of an event can be covered and stories are chosen over others.  This is not the case with citizens promoting Ron Paul.  Youtube features many of the video coverage of Ron Paul's visit.  This allows viewers to see the entire speech for themselves and have access to it, even if one was not able to go to the event.

As Jon Stewart notices, there is an issue of Ron Paul being ignored by major media organizations since the beginning of his campaign. The reasons for this remains unclear to me, but I would assume that all Republican candidates should get equal coverage, not just with who is the most popular for the moment.

Overall, complete coverage of an event is crucial to understanding the information put out in the internet, television, or newspapers.  In order for news organizations, big or small, to convey information effectively to people, whether as a large scale as all of the US or just UCSD, there should be a process where the information is constantly and completely updated and followed.
Posted by Vannie Nguyen at 12:20 PM

Email ThisBlogThis!Share to TwitterShare to FacebookShare to Pinterest
Labels: localization