The New York Times is often thought of as one of the largest news organizations in the United States and is also the current record holder for taking home the most pulitzer prizes as well.  Since the early days, circulation of newspaper print has been the bread and butter of most newspaper organizations for financial revenue.  Evidently, with the mass transition into the digital medium, digital media and the news has taken the market by storm, reducing potential revenue of physical print circulation. This lead to financial set backs that inevitably lead to massive debt, with one of the creditors being Carlos Slim.  The New York Times has cut back on many sub-divisions within the company such as selling Regional Media Group to dig its way out of debt.

The interesting part of this story is that the New York Times was able to pay back their debt with Carlos Slim three and a half years early which saved them a quite bit of money from accruing interest. In class, we talked about the significance of Google's allocation of ads in their search engine. It accounted for the majority of their annual revenue, and even more so after they developed specific algorithms to help narrow down and personalize an individual's search results with corresponding ads. 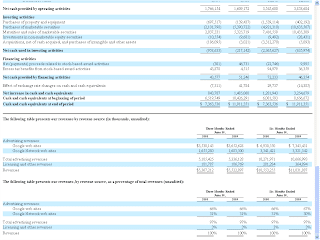 As shown in this image of Google's financial ledger for 2009, nearly 97% of their gross annual revenue came from advertisements.

Just like Google, The New York Times attributed much of their revenue from ads. With the growing popularity for digitized media, it is hard to imagine paper print circulation having any chance in the consumer market. This transition into the digital media scape could lead to large news corporations like the New York Times to lose paper circulation revenue and establish an inverse ratio with ad revenue right? Surprisingly, that is not with the New York Times. While print circulation is on a steady increase by increments of three percent a year give or take, ad revenue is slowly declining by the same amount respectively. Although the company is barely holding its own financially, especially with the five year news depression, it's able to "tread water" for now. There are some interesting points here in regards to why circulation of print news is slowly rising with ads declining every year. Some students in class stated that reading something on a machine or device is a difference experience from reading a physical paper. Although a highly subjective case, it may be what's keeping the New York Times afloat.