The Role of Ustream in Citizen Journalism

Ustream.tv is a site where users with commonly available consumer technology can broadcast footage live to potentially large audiences over the Internet. According to Ustream's mission statement, their goal is "to bring people together around shared interests for amazing live, interactive experiences that build and maintain relationships." While the site does occasionally host pay-per-view content, and is used by some major media providers, it is largely a community-driven site that gives regular individuals the chance to broadcast their own experiences. With everything from action-packed protest footage to a live stream of kelp forests, Ustream hosts a large array of content with the potential for great journalistic significance.

Earlier this week, our class spoke with Sam Gregory of Witness.org. While Gregory emphasized that his efforts were more in line with witness journalism rather than citizen journalism, this premise of empowering average individuals to take an active role in broadcasting their experiences rests at the heart of both of these concepts. During the conversation, Gregory mentioned that Witness.org was developing iPhone apps that would enable users to better shoot and share footage on their mobile device. In a similar sense, Ustream actively encourages users to become citizen journalists by downloading their smartphone apps, available for both Android and iPhone. While this might grant users better access to tools that can empower them, the casual nature of such simple broadcasting also poses potential issues concerning the safety of both the individual behind the camera, and the individuals who may be present in the frame.

In the context of citizen/witness journalism, Ustream is interesting not because of what it offers to the user, but because of what it doesn't offer. Unlike sites like Witness.org or YouTube where the user has the ability to consciously decide what footage to upload and pass on to the world, Ustream's video sharing capabilities are live and in-the-moment. While a user with the smartphone app does consciously decide to open the app and start shooting, there is no secondary process to censor or limit the footage. Unless an individual on the other end is watching footage that has been archived and replayed, the experience of using Ustream is instantaneous.

This also poses a potential threat for powers that might otherwise wish to limit video footage leaving a particular situation, as you cannot erase footage that has already been transmitted live across the world (though one could technically limit or prevent the ability for the saved footage to be replayed on the site). However, such a technological advantage is dependent on a stable connection to the Internet. Thus, in many conflicts pertaining to human rights in remote regions, Ustream may never be a valuable tool in the hands of witnesses, as such a stable Internet connection may be hard to come by. This may be the reason why footage of Occupy protests is much more common on the site, in comparison to protests such as those occurring in Syria. 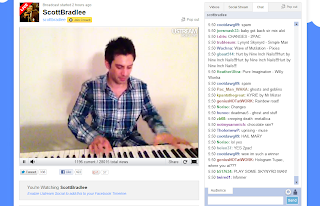 Another interesting aspect of the site is its potential for two-way communication. While it might prove difficult for such communication to occur in dangerous situations, more casual uses of Ustream often take advantage of the site's chat and message features during live broadcasts. In a recent example, musician Scot Bradlee posted on the social news site Reddit.com that he was going to spend the day taking requests to play ragtime-style versions of songs that users suggested. His endeavor, now archived on the site, gained over 26,000 views total throughout the day. While this particular use of Ustream might not have constituted a breaking-news event that might change the world's political landscape, it nevertheless speaks to the immense potential for these technologies to empower otherwise anonymous individuals to broadcast their message, and let their voice be heard.