MetaFilter and Citizen Journalism in the 9/11 Attacks

Over the past many weeks, our class has analyzed specific case examples of the Internet's role in providing a tool for ordinary individuals to contribute to journalistic dialogue as events emerge. One of the benefits of using the Internet to studying citizen journalism is that fact that, to a large extent, many instances of citizen and witness journalism can still be found in their archived real-time state. The website MetaFilter, which has been in operation since 1999, is a great example of being able to 'go back in time' and track real-life responses to famous events as they occurred. 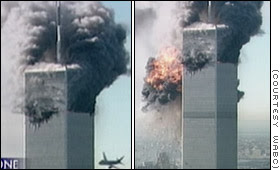 The MetaFilter entry for September 11th, 2001 provides for a particularly interesting, if not immensely haunting, analysis of eyewitness reports coming together through a unified electronic medium to coordinate information on a large scale. The first post on MetaFilter occurred at 8:58am, twelve minutes after the first plane hit the north tower (listed at 5:58am in the post, Pacific Time). Following the comments in the thread, one will find users chiming in, trying to gather as many details as possible. Only a few comments down, user TNLNYC posted at 9:06am (6:06 PST) that a second plane hit the South tower, an event which had occurred only three minutes prior. Commentators begin speculating almost immediately as to who perpetrated the attacks, and whether or not they were attacks in the first place. cCranium posted the first image in the thread at 9:33am (6:33am PST), which although taken from the website of a traditional news organization, represents an early use of using social media to spread multimedia and imagery about disasters.

In terms of commentary, one of the most striking moments of foreshadow comes from user ktheory, who states that "our focus (as Americans) must not only to bring justice to those organizing this attack, but on preserving civil liberties. During peacetime, it's easier to be socially conscious and live morally. I'm most concerned that an event this drastic will cause many to replace ideologies based on reason with ideologies based on fear." Furthermore, user Doug posted at 9:51am (6:51am PST) that "This is going to be a big turning point in the history and character of this country," which is followed by reports only minutes later that the south tower had just collapsed, the first of the buildings to fall. More than functioning as a mere log of events, comments such as these demonstrate the emergence of sentiments that would later permeate our discourse surrounding this particular historical event.

MetaFilter itself is unique in that it does not represent, in straightforward terms, an "open" and free web. Since 2004, MetaFilter has charged a $5 sign-up fee for creating an account, which although potentially limiting to some users and demographics, prevents a flood of troll and spam accounts. The site also features relatively strict guidelines, aimed at maintaining the site's purpose as a literal "filter" for the most interesting content on the web. Thanks to these restrictions, MetaFilter has remained a niche community, though its simplicity and ability to foster discussion nonetheless allow it to access as a hub for eyewitness reporting when important events and disasters occur. In this sense, it becomes a moderated, yet very much fruitful, outlet for the facilitation and preservation of discussion. In doing so, users nowadays can explore these time capsules of dialogue surrounding major events since the beginning of the last decade, providing a valuable resource not only for studying the emergence of early Internet citizen journalism, but also for discovering the rhetoric that surrounded such events within the discussion of ordinary individuals.