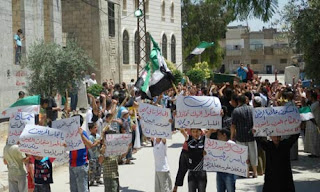 Last week gruesome images of a recent Syrian massacre were broadcasted on YouTube.  Syrian activists uploaded a video that showed dead children's bodies after Syrian security assaulted and killed over 100 people. http://www.youtube.com/watch?v=ZYeydWm00Yc&skipcontrinter=1
These killings were reportedly executed by hoodlums loyal to Syrian president's, Bashar Assad, regime.  Thanks to social media sites like YouTube Syrian activists have a platform to show the world the horrible depredation happening in their country.  However, the Syrian government has attempted to use YouTube as a trap to monitor Syrian activists.
A few months ago the Syrian government allegedly created a fake YouTube website that planted malware  in the computer of any individual who left a comment.  This allowed the government to track activist's computer activity and keystrokes.  Because the fake site was so similar to the original one, many of these people had no clue that they were under the surveillance of the government.
If Syrian activists do not have access to an outlet that allows them to report the horrible events happening in Syria then the world would not realize the extent of the problem and it would make it less evident that the United Nations needs to step in and help.  Websites like YouTube allow individuals and groups to have access to a larger audience and draw more attention to various problems in hopes of change. It's bad enough that governments can censor the news and it is an even more terrifying idea that governments can use the internet as a weapon to monitor what people are doing.
http://www.guardian.co.uk/technology/2012/mar/20/syrian-activists-fake-youtube
Posted by Carrie at 9:29 PM