Voice of San Diego: Investigative Journalism In Our Own Backyard 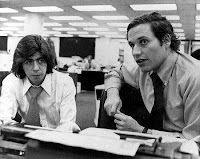 Watergate is still considered "the biggest political scandal in American history". It is also considered the one of the most prominent examples of investigative journalism's influence on public institutions.

However in the contemporary period, the practice of investigative journalism within top national newspapers has severely declined. This has resulted from the large costs and the often-controversial findings that leave powerful institutions and advertisers uncomfortable.

On June 5th, veteran investigative journalist Jeff Brazil claimed that this decline leaves leeway for large corporations to commit indecent crimes without being caught. Jeff's assertion may be bleak, but not all hope is lost. With the decline of top newspaper support came the spawn of local non-profit organizations that support investigative journalism efforts.

This discovered information is significant for any San Diego citizen to know, as it is influencing them directly. For example, the Fact Check Blog posts about political stories in San Diego County. It's author, Keegan Kyle, fact checks what politicians say and rates the story with comprehensible ratings that range from "true" to "huckster propaganda", the key and definitions is seen here:

Most notorious investigative journalism cases focus on a story that has national impact, but it's also significant to know the facts behind the processes of your local institutions. Voice of San Diego's Fact Check Blog can have a large influence on local elections. The non-profit as a whole could drastically change how a San Diego citizen views their community and possibly provoke change.

Jeff Brazil said that investigative journalism is needed for democracy to work. How else would we know this information behind public institutions to make an informed decision about the community we live in? How else can we provoke change on the things that matter most?
Posted by Unknown at 2:27 PM